I went to the beach recently with Drew and his family. It was the most refreshing weekend I’ve had in a long time. A lot of talking, eating, reading, swinging, sunning, more eating, and a little bit of fishing.

Also, during this weekend I bought a floppy hat!

Side Note: I’m always pretty delayed when it comes to jumping on a fashion bandwagon. If I’m unsure about it, I think it might just go away and I will still be cool and in style. But usually I just miss it—or I’m extremely tardy. (This was the case for skinny jeans, flannel, floppy hats, and currently the half-up bun.)

So there was that. And then there was a jetty, where I sat sweetly on a rock, soaking up the sun, chatting with my husband while he fished…. Until I got bored.

“Alright. Teach me how to fish.”

He baited a hook, showed me how to cast, and I attempted. And this “sport” that looked so easy, was painfully not. (I’m sorry if I offend you with the quotes here….it just seems necessary…especially because what I was doing was the furthest thing from sport).

After a few feeble attempts at casting out into the water and not onto my toes, I decided I needed more force. So I really put my arm into it. The line broke and the bait–still attached to the hook–went flying.

Oops. Clearly fishing is not for me!

I set the rod and reel down immediately.

Then I realized that failing this time didn’t mean I had to stop forever.

So I picked that rod and reel back up and Drew taught me how to fix it. How to string the line back through the rod and attach another hook.

All this time, I had quiet tears streaming down my face. (Praise the Lord for floppy hats, right?!)

I cried because, well, that’s just what I do with most emotions. But mostly because I realized something significant about myself:

I am deeply afraid of failing.

This fear is so paralyzing that I quit doing things—or never start—if failure threatens to seep into the picture.

As I stood there trying to get the stupid line through the hook, I kept thinking about how instinctual it was for me to put the rod down when I glimpsed a moment of failure. If we weren’t isolated on that jetty, I probably would have walked away and never gone fishing again. It was such a stilly thing to cry about, I know that. But as those tears slid down my cheek, masked by that glorious floppy hat, I thought about all the other times I failed and walked away instead of trying again—instead of learning, and growing, and changing.

In that moment, God showed me a picture of His love in the way Drew responded. Drew was gracious and gentle, patiently teaching me how to make things right, and once again, how to cast.

As I kept trying, thinking of the all the other times I didn’t, God whispered this verse in my heart:

Do I really believe that?

God loves in such a perfect way that you and I don’t have to fear anything. Even failure. When we do fail? God demonstrates His perfect love through His patience, His gentleness, His grace, His teaching, and in His invitation to try again.

I am a Jesus follower who deeply values honesty, friendship, and chocolate. I want this space to be a reminder that you are not alone! In both the messy and sweet parts of life, God has something to say to you. Let's seek his voice and his Truth because without that, nothing else matters! View all posts by Callie Clayton 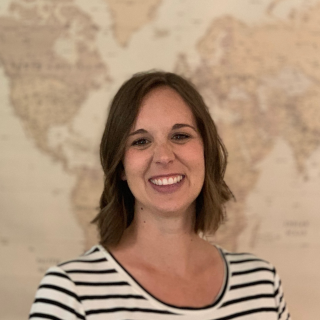 I am a Jesus follower who deeply values honesty, friendship, and chocolate. I want this space to be a reminder that you are not alone! In both the messy and sweet parts of life, God has something to say to you. Let's seek his voice and his Truth because without that, nothing else matters!